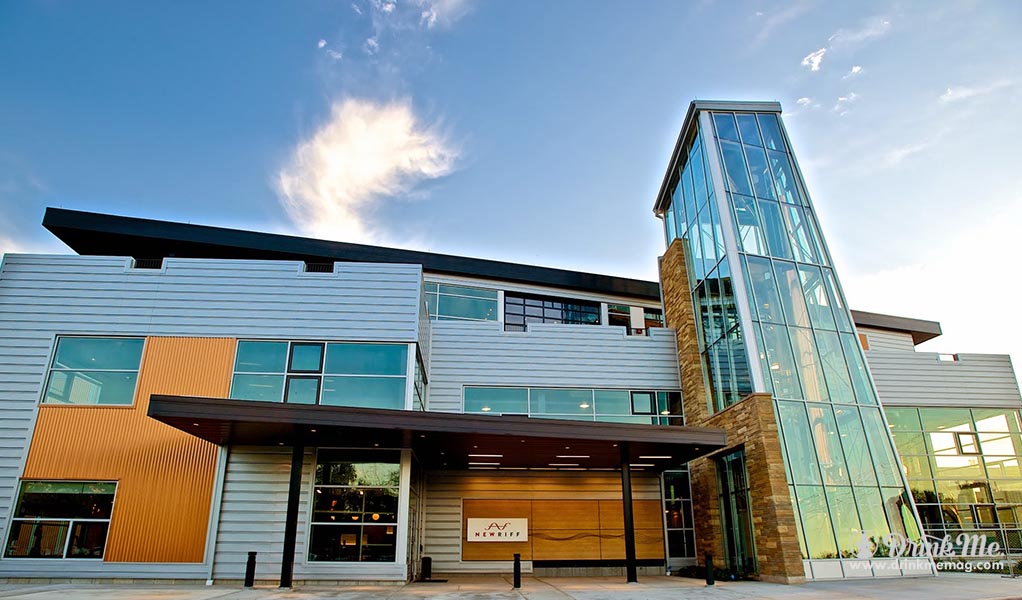 Kentucky is synonymous with Bourbon. (Okay, and horses.) And bourbon was recognized by the U.S. Congress as “the true American spirit.” So what’s a distilling industry newcomer to do when the competition has been entrenched almost since the inception of the country?

For the New Riff Distillery, the double-shot answer is to adhere to tradition while creating something fresh. You feel this when you arrive at the New Riff complex and are greeted by a modern glass, steel and stone structure that is visually anchored by a six-story-high copper still. According to V.P. and Distiller Jay Erisman, “We’ll make new forms of whiskey, but we also work to master the old ones.”

The attitude that it’s good to have a foot in each world was the source of the distillery’s name. Founder Ken Lewis, an avid music lover, borrowed a musician’s term and applied it to the venture: “It’s a ‘new riff’ (personal variation) on an old theme.” The unabashedly stated goal of the company, which was begun in 2014, is to be counted among the great small distilleries of the world. That objective certainly pushes the boundaries far out beyond Kentucky. The company’s website lays it out succinctly: “We draw guidance from spirits around the world: the grappas of Italy, the brandies of France, the eau-de-vie of Alsace, the gins of London and Maryland’s rye, all of these are in our hearts and minds as we create, and recreate.”

Erisman elucidates further: “We are inspired by Château de Beaulon in Cognac, France; Jacopo Poli’s grappa in Italy; St. George in Alameda; the Mezcal of Del Maguey; and, perhaps most of all, Springbank in Scotland.” And, when asked what his definition is of a world-class whiskey, Erisman says it should “reflect the land of its making and traditions… displaying excellence in all of its phases—aroma, appearance, flavor, and finish.”

This is maybe not such a tall order when you consider the area’s history; the first bourbons were produced in the late 1700’s. Although there is debate about the derivation of the name “whiskey,” some of Kentucky’s first barrels were branded with the county designation from where it was shipped: Bourbon. Others postulate that the name source was New Orleans’ Bourbon Street, where a lot of the whiskey landed. Even though there are no more distilleries located in what was the old Bourbon County terroir, 95% of the world’s bourbon is still crafted in the region.

What starts out as corn whiskey becomes bourbon through a process of distillation and age mellowing in charred wooden barrels. (This last step is mythologically credited to the Reverend Elijah Craig–“the Father of Bourbon”– but, in actuality, it was a technique known and used in Europe long before its American “invention”.)

And, since New Riff is situated just across the bridge from Cincinnati, Erisman explains why, historically as well as currently, the location makes perfect sense. “Greater Cincinnati was America’s pre-eminent whiskey market and commercial center at the turn of the 19th century. The former Seagram’s Distillery (originally built as the Rossville Union Distillery), which has been active since 1857, claims to be the world’s largest beverage alcohol production facility.” It’s where New Riff’s signature OKI Bourbon is made.

In keeping with the contemporary trend of food and drink “trails” that attract tourists, there is an official “Kentucky Bourbon Trail Craft Tour.” New Riff is at the northern terminus of about a dozen varied stops which include the distilleries of the well-known brands Four Roses, Jim Beam, Marker’s Mark and Wild Turkey. Two-and-a-half million visitors from all over the world travel the trail annually. (If all that bourbon isn’t enough alcohol for you, Cincinnati also produced the first commercial modern gin in the USA.)

Taking advantage of the flow of the curious and thirsty, New Riff includes a spacious event center atop the distillery; it features viewing windows and overlooks the Ohio River and the Cincinnati skyline.

“The event space is a terrific part of our marketing program,” explained Erisman. “Thousands of visitors each year interact with our building, our brand, our production process, [and] our staff.” New Riff hosts monthly tastings of whiskey, beer and wine, and even cooking classes with some recipes involving bourbon. General exposure to this treasured amber delight most often happens through a wide range of cocktails, which help to advance bourbon’s successful market growth. More than 100 countries import American whiskey with the leading buyers being the UK, Canada, Australia, Germany and Japan. China, South America and parts of Eastern Europe are also coming up fast.

As for the future, product development is regarded as a trade secret and held close to the vest at New Riff but, in a sort of liquor information leak, some privileged information was acquired. Master Distiller consultant Larry Ebersold is conducting experiments in comparing a pot still versus the column method of crafting a 100% Malted Rye whiskey. Also on the horizon, promises Erisman, “A barrel aged version of our Kentucky Wild Gin.”

New Riff is winning attention and awards. If a sip of the product convinces you of anything, it’s that the new kid on the bourbon block is gonna do just fine.

The Mint Julep is a classic Southern app for bourbon, but it’s a tad sweet for many. So here are two classic cocktail options and one recipe for food.

Old Fashioned
2 parts bourbon, 2 dashes bitters, muddled sugar cubes or simple syrup (to taste), in an Old Fashioned glass, of course, over ice, add a slice of orange and top w/ a cherry.

Manhattan
In a Manhattan glass and over ice, pour 2 oz bourbon, ½ oz sweet vermouth and plop on a maraschino cherry. (optional: dash bitters)

1) Gently pour oil into a hot skillet
2) Add chicken, cook until browned then remove and drain off extra oil.
3) Add all other ingredients to the skillet, heat and stir til mixed thoroughly
4) Add the chicken back in, turn up the heat to a rolling boil then reduce and simmer 15-20 minutes.
5) Serve over rice or noodles.