An Interview With Oz Clarke: The History of Wine in 100 Bottles 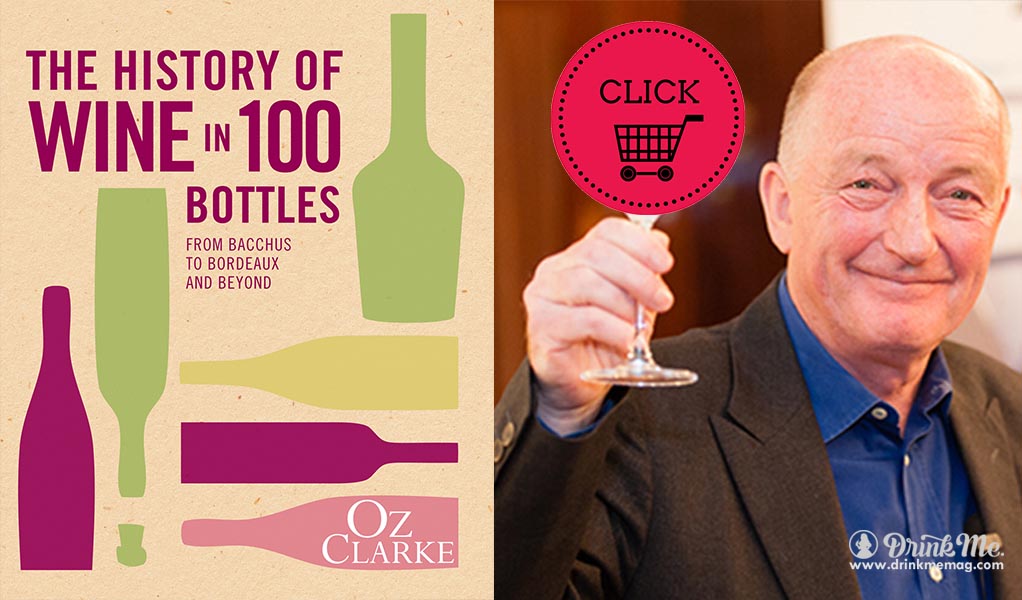 I was pleased to get my hands on a copy of Oz Clarke’s new book; The History of Wine in 100 Bottles. It’s a chronological journey through thousands of years of fascinating vinous history. I also got the chance to ask Oz a few questions. Our interview with him follows the review, so please read on…

The book starts a few thousand years BC. Previously I’ve found reading about ancient wine history to be airing on the side of tedious. The multiple unfounded, and often contradictory accounts across different prehistoric countries are a bit like Usain Bolt – impossible to keep up with. However Oz navigates us through this part of wine folklore managing to pitch at the right level and maintain interest.

The book then moves on to explore the wines, winemakers and regions that paved the way for what we drink today. Whilst packed with facts, figures and information, the miniature stories are written with a wit and flair that make them a pleasure to read. Far from a serious book, this can be picked up and put down easily, and Oz’s passion and humor really shine through in the way it’s written.

If you’re unfamiliar with the wine writer, presenter and personality, then take a look at this video. It’s somewhat retro, but much like an aged bottle of Spatlese, that only adds to the sense of quirkiness and character!

Back to the book, many of the bottles are globally famous, and their origins well publicized. However, even when I turned to a page thinking I knew all there was to know about it, I was still pleasantly surprised to learn more.

Each of the 100 double spread features are interesting in their own way, but here’s a selection of my favorite five bottles and the tales associated with them…

The book also does a good job of stepping us through the history of wine paraphernalia – talking about the inception and development of the decanters, the corkscrews, the corks and closures, etc.

A thoroughly enjoyable and informative read. Please see below what Oz had to say about the book.

Robbie Priddle: Congrats on a great book. For those who have enjoyed your writing previously, how would you compare the book to your previous releases?
Oz Clarke: I wanted to focus on story telling, as I feel like it’s too often lost in wine books, especially in recent years. Many books don’t draw people in or entertain, so from the beginning the book has been about doing just that. After all, wine is supposed to be about enjoyment and bringing people together.

RP: Many sections of the book are your own personal recollections over the years. Which new topics or bottles did you most enjoy researching and learning about?
OC: The stories with a political and social angle, that weren’t all about the wine. The research was unique as I had to move away from wine books and delve into history. I could have written four pages about the prohibition, for example. The blood vintages of Champagne is a great story, and other famous battles that took place in Champagne. I personally find that more interesting than what percentage of Pinot Noir is in the Cuvee. Christopher Merret’s invention of sparkling wine has always been a story I’ve enjoyed and researching how it coincided with progression being made in cider making and glass production was enlightening.

RP: I enjoyed the forward-looking outlook of some the topics late in the book, in particular what you wrote about the trends in natural wine and Chinese wine. If you had to write about “The Future of Wine in 1 Bottle”, what might it be?
OC: I can’t see it being natural wines, or if it is then I hope we see a reduction in the moral high ground preaching of natural wine ideology as the only wines to be enjoyed. It may well be Chinese wines, once they discover a unique style or variety that is world beating. I think the immediate future will be shaped by either rediscovered or previously undiscovered grape varieties, and with global warming it’s entirely possible it will be from countries never previously considered as wine producers.

RP: With a plethora of wine-related apps and many emerging digital communities dedicated to wine lovers, what are your thoughts on smart phones becoming essential wine drinking tools, and changing our drinking habits? Can you see the collective thousands of ratings becoming more important to drinkers than Parker points in the future?
OC: It has to – I see excessive focus on critics scores which spoils the joyous, rumbustious, rather argumentative but fundamentally good-humoured debate, which is what wine used to be all about. I’m not sure whether it’s going to be the apps or the myriad of bloggers, tweeters and social media users, but there’s a huge amount of interrelation and appreciation that is only going to grow.

About the Author Robbie Priddle

Robbie is a keen wine journalist with a trusty palate, an eye for what’s hot and talent for writing mouth-watering reviews. As Drink Me’s UK Wine Specialist, he advises and reports on the wine trends and the drinking scene throughout the UK and Europe. Traveling to all corners of the globe, Robbie is on the ground constantly expanding his knowledge, always managing to find a vineyard (or three), and a variety of wine related know-how to enlighten folks just like you.