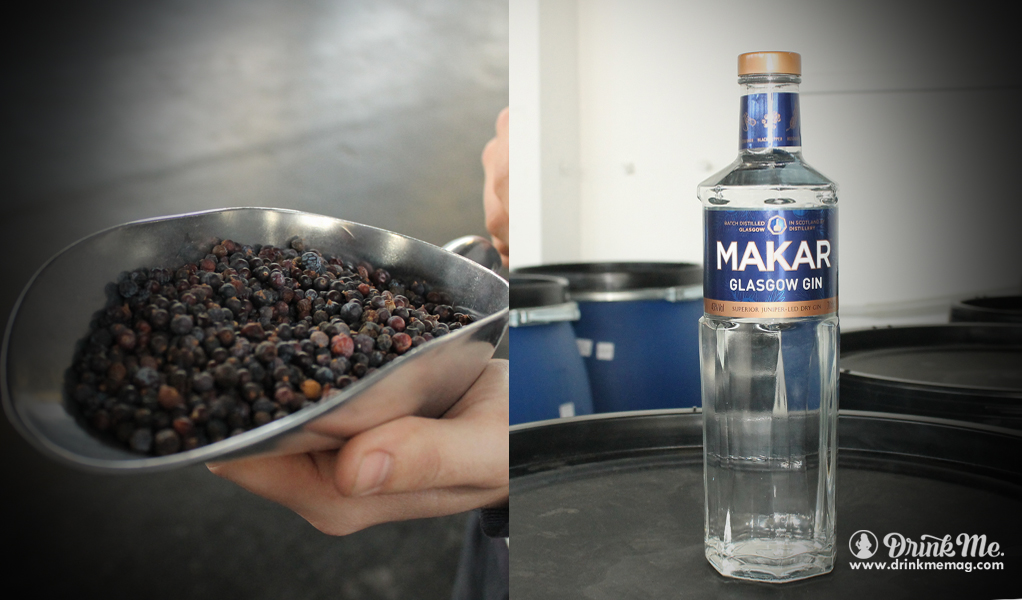 You know the gin thing that’s been happening lately? It’s going on in Glasgow, too. GinFest was held last month at Glasgow’s Barras Art and Design Center, and the city now has its first dedicated gin bar, Gin 71, which offers (you guessed it) 71 brands of gin.

This autumn was also when the first runs of Makar Gin from the Glasgow Distillery Company were completed, an important new venture boasting the only gin distilled within the city. I flew to Scotland to get the scoop for Drink Me readers the week that bottling was set to begin. Master Distiller Jack Mayo showed me around and offered some insight into the spirit.

The makers of Makar (named after the old Gaelic word for poet) have kept their recipe straightforward, with the requisite juniper plus seven botanicals traditionally used in the dry gin method. “Our goal is an easy drinking gin that can be enjoyed neat,” Mayo said. Among the ingredients are lemons from Spain, angelica root, coriander (which is trendy in gin lately; in Makar it’s from Bulgaria), and licorice from China to add a woody note. One of the company directors, Mike Hayward, observed that certain botanicals provide a nuance that people describe approvingly as “peppery,” so he thought, why not use black pepper, too? So black pepper it is. Rosemary can be difficult to source—did you know that? I didn’t; I thought it was a hardy perennial. Anyway, for the first batch of Makar, the rosemary was imported from Israel.

The rosemary and lemon go into the helmet and the rest of the herbs are put into the pot. The 450-liter still was made by Carl of Germany and is named Annie after Hayward’s grandmother, who was known for her entrepreneurial streak. Its unusual feature is a side column with six plates, each for a different stage of the distillation, and there’s a pre-condenser on the top.

It takes about eight hours to do a run—at 25% ABV, Mayo said, “We don’t push it to the limit.” He had been storing each day’s run in a separate blue barrel. “We test a week’s distillation for consistency, then marry it all together,” he said. I sniffed a batch: Lemony.

The spirit is bottled at 43% ABV. The tall bespoke bottles, made with an eye toward good back-shelf visibility, have seven sides to represent the seven botanicals that complement the juniper, and the Glasgow Distillery folks label each bottle by hand.

The distillery will also produce a single malt whisky, to hit the market in a few years. The Glasgow Distillery crew is excited about the temperature controlled equipment that will allow either cold or warm fermentation.

They’ve begun shipping online orders for their gin and have plans to market to US consumers. Upon returning home, I opened my sample bottle and tasted. The juniper comes through honestly with the citrus and rosemary clearly present as well. It would pair well with something peppery and dry.