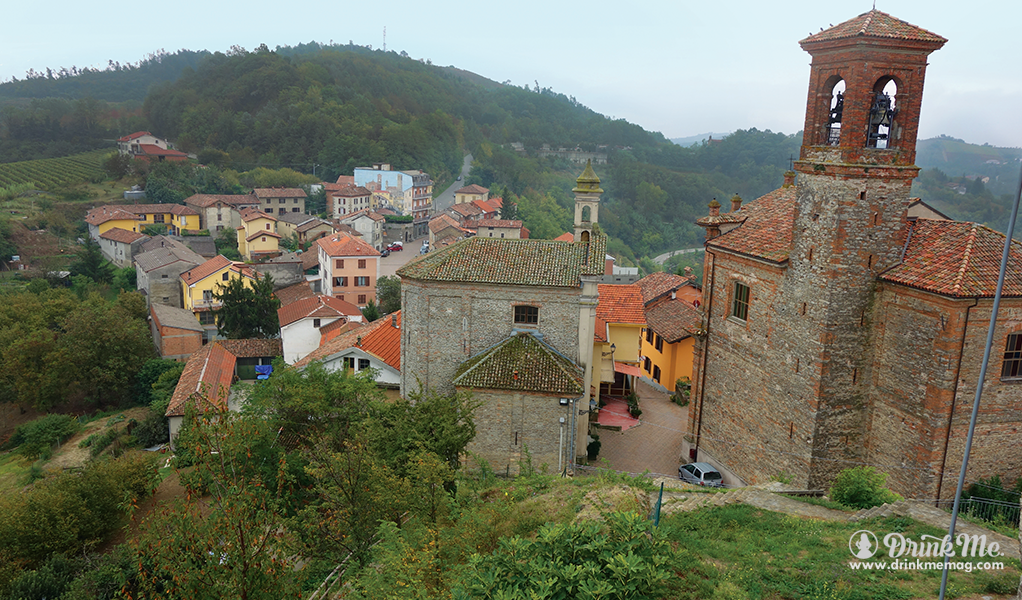 A recent trip took me back to Acqui Terme in Italy’s Piedmont region. After having lived there almost two decades ago, I was thirsting for the region’s signature and rare wine: the sweet sparkling Brachetto. And then, of course the town is also conveniently an ancient Roman settlement famous for its hot sulphur springs.

I checked into the Grand Hotel Nuove Terme overlooking the center of the town and started the trip with a dip in the hotel’s roman baths, which include a thermal pool with a waterfall and hydro-massagers. After a little invigoration, I was ready to explore.

First stop was to Marenco Winery in Strevi. Michela Marenco is the third generation in her family to run the winery. After a drive through the vineyards and a tour through the winery, we ate dinner at Ristorante Nuovo Parisio, where I enjoyed the Marenco Pineto 2012 with the local goats milk cheese Robiola di Roccaverano. The Brachetto smelled like roses and tasted like raspberries, strawberries, and melted cherry jolly ranchers.

The next day began with a drive through the Brachetto countryside with an agronomist. He explained that the town of Acqui Terme, home of twenty thousand, is one of the principle winemaking communes of Brachetto d’Acqui DOCG. Because they are at the foothill of the Alps, the region has harsh winters and hot summers that contribute to the high sugar content of the plump, dark ruby Brachetto grapes. With so much sugar, there’s enough remaining for a second fermentation in the tank, resulting in either frizzante with five percent alcohol or spumante with seven percent.

After sunset, I met with winemaker Stefano Ricagno at Enoteca La Curia for a dinner of fresh shaved truffles over that same Robiola di Roccaverano and fresh pasta with porcini mushrooms. We finished with his own Ca’ dei Mandorli Brachetto d’Acqui, a dark red wine with flavors of wild strawberries and roses. It paired beautifully with the dark chocolate gelato and meringue.

The next day I visited Giacomo Bologna Winery where third generation Raffaella Braida took me through the vineyard. Raffaella and her brother Giuseppe are both winemakers and share the duties of running the winery. While her brother holds the position of Chief Winemaker, Raffaella, as the older sibling, continues her legendary father Giacomo Bologno’s vision of family and passion. If she’s the heart and he’s the hands, then the mouth is the family restaurant I Bologna. After watching the chef’s mother make handmade agnolotti and indulging in a delicious lunch, I enjoyed the fresh, fruity Braida Brachetto d’Acqui with perfect dessert pairings of coconut panna cotta with pineapple granita, crème brulee, hazelnut gelato, and chocolate.

As I rolled out of lunch I made my way to my final winery stop: Banfi. With wineries in both Tuscany and Piedmont, the winery specializes in sparkling wines and most importantly Rosa Regale made from Brachetto grapes. With a label featuring a single red rose, Rosa Regale is one of the most recognized Brachetto d’Acquis in the US. I enjoyed a few glasses of the Rosa Regale next to a bowl of fresh sliced peaches swimming in Brachetto. The sweetness and acidity of the peaches with the wine made a perfect combination.

My last stop was a cooking and cocktails class – yes, with Brachetto – at The B. Ristorante. Showing the diversity of what Brachetto can do, Chef and Owner Barbara taught me how to make both a sweet dish: Bavarois, or Bavarian cream, and a savory dish: Involtini made with pork wrapped around lardo and prunes. I also played with Brachetto in cocktails muddling berries with Aperol and topping that with Brachetto and a squeeze of orange.

For all of these wine producers, Brachetto is only a small percentage of what the region produces. The area is famous for Barbera and Moscato, and they also cultivate the little-known grape called Albarossa, a hybrid of Nebbiolo and Barbera. But, Brachetto d’Acqui is a wine they are all passionate about and as the saying goes in Acqui Terme, “Dove l’Acqua è Salute e il Vino Allegria – Where the water is health and the wine is joy.”